tracing our beginning back to the mid-1850's.

The business began as Decatur Brick Manufacturing Company, which was founded on Decatur’s West End where Lincoln Park is now located. Clay was mined and bricks were made at that location until the clay deposits were exhausted in the early 20th century. In 1914, Decatur Brick Manufacturing Company moved from the West End to its current location at 1595 North Calhoun Street. The current office building and state-of-the-art bee hive kilns were built and clay was shipped in by rail car to continue manufacturing brick in Decatur. The brick was shipped throughout the Midwestern United States and even into Canada.

By the 1930’s, it had become cost prohibitive to ship the raw material to Decatur for the manufacturing of brick. The kilns were shut down and only the masonry distributorship continued. In 1936, Edward Martin Woare renamed the distributorship Woare Builders Supply Co. He remained President of the business until he retired and was succeeded by his son, Edward Mattes Woare. Edward Mattes Woare continued in his father’s footsteps, selling masonry products throughout Central Illinois until his retirement when his son, Edward Weidner Woare became President.

Edward W. Woare has now sold the business to his two nephews, Mark and Paul Bateman. Mark and Paul renamed the business Woare's Inc., but continue to offer a full line of masonry products. Under their leadership, the company has diversified by adding a landscape and outdoor living division to complement their masonry sales. Mark and Paul represent the 6th generation of their family to own and operate the business in Decatur. 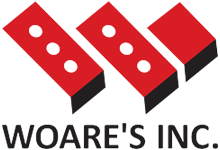